OFF WITH HER HEAD!

The first spring term has seen our new Tudor topic begin with the reopened case of Anne Boleyn's beheading! What did she do to upset Henry? Did she deserve it? What actually happened?

Our class will be researching the answers to these questions along with many other aspects of Tudor life: family trees, crime and punishment, houses and homes and much more.

The first week saw the creation of a Tudor timeline and we have researched the life of Henry VIII in preparation for our biography writing later on.

Y5 have now also created the Tudor family tree after discussing how our own trees would look and have compared maps of modern day London to Tudor London, discussing the differences and similarities in the human and physical features.

Painitings of famous Tudors, such as Henry, Anne and Edward, have been started, along with Tudor roses and our giant portrait of King Henry VIII, with each pair using pastel to complete a piece of the jigsaw.

Once again, our class have been bringing in some amazing homework pieces! Thank you for all the effort at home that go into these :)

Year 5 have now written a newspaper article on the beheading of Anne Boleyn. We have conducted our court case on the trial of Anne Boleyn, presenting evidence and questioning witnesses. We even had the honour of presenting our case in front of our local mayor! After the trial, we concluded with a democratic vote. Year 5 decided that history was correct and Anne should indeed have lost her head! However, there was only one vote in it!!

OFF WITH HER HEAD!

Year 5 have been playing emoji pairs and emoji charades in our introduction to this years e-safety day. We have been discussing how not everything we see or read online is trustworthy and how to be an up-stander rather than a bystander in situations where someone might need help.

Can you decipher our emoji tips on how to stay safe online?

To get into the Christmas spirit, Year 5 have had a lovely morning playing games in the hall together (although the adults may have had more fun than them!) as part of our party. We have celebrated our achievements over the last two days of term, enjoyed some treats and now look forward to seeing the start of our next topic: 'Off With Her Head!' in the new year :)

A HUGE thank you to everyone who participated in our carol service and who came to support the beautiful singing we heard! It was a lovely evening and a great way to welcome the holidays.

Id like to take this opportunity to wish all pupils and their families a very Happy Christmas and best wishes for 2017! 🎄🎄🎄

Our second topic saw the experience of Scream Machine over the Christmas half term. We have experienced hair-raising rides and the excitement and thrill of all things fairground! We began with a visit to the local museum to eland about the history of our very own Ilkeston Fair, before taking a trip around it to experience the sights, sounds and smells!

We have looked at the physics of roller coasters, including centripetal force, and performed the poem 'The Ride'. We also tried our hand at coding our own 'robots' with mixed success! We used stacks of cups and tried programming each other in order to create certain structures. When we encountered a problem, we 'decoded' our steps to resolve it :)

Groups conducted a mini investigation into how the size of a loop-the-loop affects the distance travelled by a cart and have researched the geographical locations of various theme parks in the UK before calculating the cost of a day trip to one of their choice! Everyone was surprised at how much a visit costs! A further science session involved three different investigations into friction, air resistance and sinking in water. Pupils worked in small groups to collate, record and interpret their findings.

Once again, we have seen some absolutely brilliant pieces of homework being presented! A fantastic job by many pupils, well done!

Year 5 tried their hand at designing their own theme park logo and created their own narrative containing direct speech and a dilemma occurring. These ranged from broken down rides to lost children and severe weather incidents! Pairs have also recorded their own radio advert, advertising a new and exciting ride! (Unfortunately, Miss Robinson can not work out how to upload these on to the website :( ) Pupils then create different their first non-fiction book on their rides, using features such as: a glossary, cohesive devices, factual information, photos, captions and subheadings.

This half term, we have also looked at using colons to introduce lists and have been 'Human Sentences'! Have a look the the pictures below :) Year 5 are also revising countries of Europe and have been creating gymnastics routines in PE. Have a look at us using the app: 'Hudl Technique' to record and analyse each other :)

The run up to Christmas has seen the next 'Innovate' week begin, with teams designing and making their own 'egg-citing' new egg drop ride! Teams have created their rides from a variety of materials and were tested in front of an audience. Each ride had to complete two drops with two passenger eggs! Check out our photos to see our success and casualties! Each group then completed a review of their ride by comparing it to the original brief they were given.

Year 5 have been looking at the difference between being rude, being mean and being a bully. We have discussed scenarios that reflect these three areas and how we know the difference between them. Pupils then created their own #anti-bullying sign with a positive message or piece of advice on them. Have a look at some examples below :)

We started our Y5 journey exploring the realms of Alchemy Island! This included:

In September, we made our way across the island, using 6 figure co-ordinates, wrote raps and fantasy openers and also witnessed an irreversible reaction as we made our own Fountain of Gold! Have a look at our photos to see what we created! We have discussed different changes and reactions in our science lessons and experimented with dissolving, melting and burning.

We have had some fantastic first pieces of homework-photos have been uploaded of some great examples of the level of effort we expect in Year 5! :)

October has seen the excitement of a gem hunt, with Y5 thinking of effective adjectives, synonyms and phrases to describe them, ready to write our own poems. Have a look at our Pic Collage of the morning!

The final fortnight of term has seen the introduction of the first Innovate Week of Year 5! Groups have been set the task of designing their own Alchemy Island themed board game! We have conducted market research by looking into different board games currently available and each team has almost finished their final product ready to pitch for money later this week!

Thank you to all adults who came to share our trialling afternoon where all teams discussed and tried out their game :) Pictures have now been uploaded! 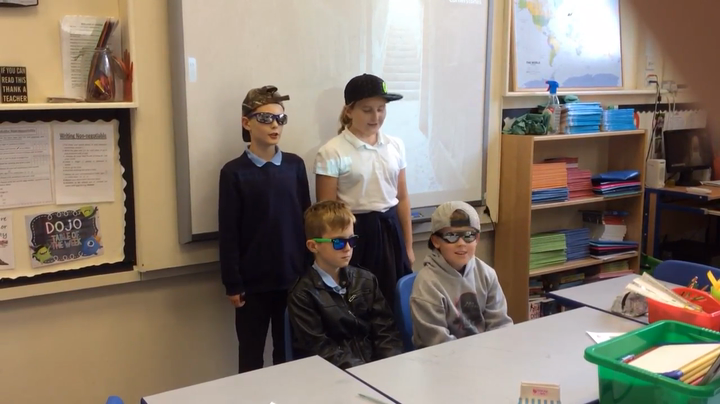 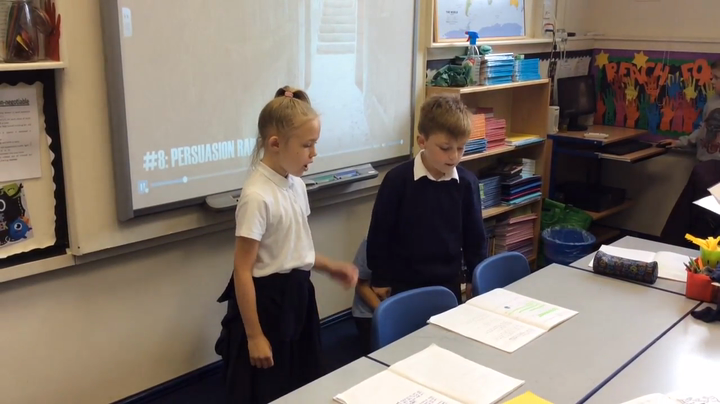 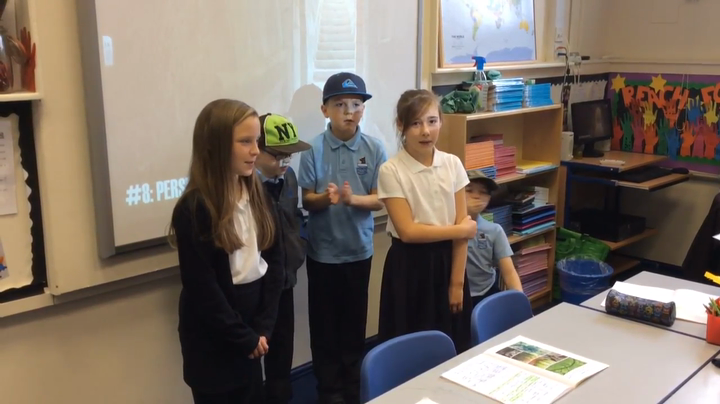 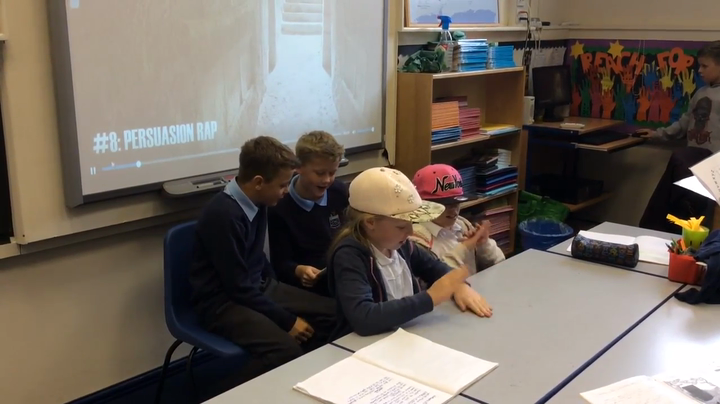 At Granby, we are trialling our first 'Maths Week' where each day we will be having a go at new maths games and activities. So far, Y5 have taken part in a Maths problem solving and code breaker trail and have had a go at the challenge of creating the largest 3D shape out of newspaper! Tuesday saw the challenge of representing mathematical vocabulary in a picture collage using the app 'Pic Collage'.

We have now also worked with our Y3s during a class swap session where Y5 pupils played a variety of maths games together :)

Nelson Mandela, Rosa Parks, Mary Seacole, Martin Luther King, Barack Obama,  the list of inspiring figures in black history goes on, but how much do our pupils know about their achievements?

October is Black History Month, the time of year when the culture, history and achievements of black and ethnic minority communities take centre stage.

In the first week of October, Year 5 have taken part in a fact finding trail containing key information about several significant figures in black history. We are preparing to research further details online later this week and present a fact file on an influential person of our choice for display! Ask your child what they can remember from today's mission! :)

We have looked at staying safe online this week and have reminded ourselves that passwords are like pants and should not be shared with strangers and should also be changed regularly! Have a look at the link below to test your own passwords!

Year 5 have experienced a workshop in which we have discussed the different types of abuse that a child may experience and what we should all do if we have a worry or concern. We have discussed who a trusted adult may be and that it is always best to speak to someone if something is troubling you.

In Y5, we will be continuing to build upon our knowledge of secure passwords, keeping ourselves safe online and cyber bulling. Check back over the next few weeks for updates on our work on this subject!

We have been working on solving multi-step problems and everyone has shown some fantastic teamwork!

Running up to Christmas, our group had a go on 'Kahoot!', revising the mathematics we have covered so far :)

The Spring term has seen a greater focus on problem solving a and logical reasoning. Pupils have worked in pairs and small groups to investigate these.

The Summer term has been focussing on area, perimeter and measuring angles so far!

Each week, anyone who has beaten their score has their photo taken! Check back each week to see who has achieved their high score!

Unfortunately not the ones with chocolate chips.

Some cookies are necessary in order to make this website function correctly. These are set by default and whilst you can block or delete them by changing your browser settings, some functionality such as being able to log in to the website will not work if you do this. The necessary cookies set on this website are as follows:

Cookies that are not necessary to make the website work, but which enable additional functionality, can also be set. By default these cookies are disabled, but you can choose to enable them below: